Today, the 6th and 7th grade students of M.S. 256 took part in the centennial celebration of the Joan of Arc Statue, one of the City’s crown jewels, an artwork of worldwide significance, as well as a community landmark. MS256 is also called The Joan of Arc school as it is located on 93rd street, a few blocks from Joan of Arc Island on Riverside Park in New York’s Upper West Side. The students are here with their teacher, Patricia Leboeuf, and Principal Brian Zager.

This impressive bronze equestrian sculpture of 15th century French patriot and martyr Joan of Arc (1411–1431) is one of the finest works of art in the Parks collection. Created by the eminent artist and art patron Anna Vaughn Hyatt Huntington (1876–1973), the piece was dedicated in 1915. When the statue was unveiled in 1915, children of the Joan of Arc school were already in attendance. Today marks a special moment for both the Riverside Park Conservancy and M.S. 256’s current students who all attend the school’s French dual language program.

In New York, a prominent group of citizens formed a Joan of Arc monument committee in 1909. Their efforts coincided with those of a young sculptor, Anna Hyatt Huntington, to create a sculpture of Joan. Her first version, in which she emphasized “the spiritual rather than the warlike point of view,” was submitted to the prestigious Salon in Paris. It received an honorable mention from the jury, nevertheless skeptical that such an accomplished work of art could have been made solely by a woman.

The New York monument committee, headed by J. Sanford Saltus, was so impressed by her work, that they awarded her the commission. Architect John van Pelt was retained to design the pedestal, which is made of Mohegan granite composed of Gothic-style blind arches, decorated with coats of arms. A few limestone blocks from the tower in Rouen where Joan of Arc had been imprisoned were incorporated into the base. Van Pelt situated the monument at the top of the steps in the park island at 93rd Street and Riverside, and had planted a screen of trees to disguise the buildings.

On December 6, 1915, the sculpture was unveiled in an elaborate ceremony, which included a military band and French Ambassador Jean J. Jusserand. Mrs. Thomas Alva Edison was among those selected to pull the cord that released the shroud.  In 1987, the sculpture again underwent a full conservation financed by the Grand Marnier Foundation through the Municipal Art Society’s Adopt-A-Monument Program. 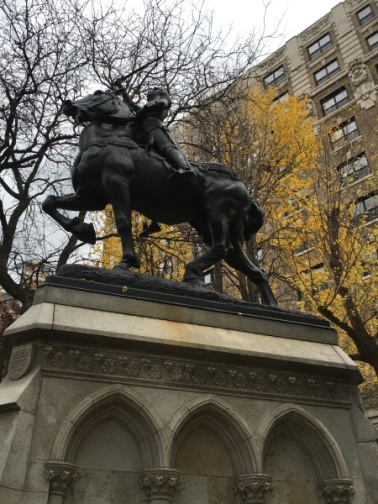 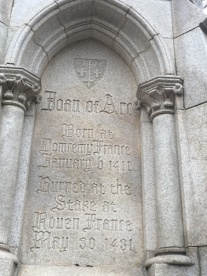